Become an URBAN volunteer! URBAN will monitor water quality and use biological indicators to represent water quality in streams and wetlands of the Hamilton region. Continuous water quality monitoring is essential in detecting potential threats to one of the world’s greatest fresh water resources, the Laurentian Great Lakes.

The McMaster University's Urban-Rural Biomonitoring and Assessment Network (URBAN) has run a volunteer-based science program for Hamilton and Burlington since 2010. This program allows residents, especially youth, to monitor the health of the streams and wetlands in their communities, and to become more aware of impacts of pollutants in our environment. A common pollutant is phosphorus, which when present in excess can lead to growth of algal blooms and associated environmental problems in downstream water bodies.

Of the key ecosystem services provided by wetlands, one of the most important is provision of habitat for numerous fish, bird and wildlife species. Nowhere is this more important than in the thousands of pristine coastal marshes lining the shoreline of eastern and northern Georgian Bay (see Figure 1). Since wetlands occur at the interface between water and land, both aquatic species (fish, water lilies, pondweeds) and terrestrial species (wet meadow plants, insects), as well as semi-aquatic species such as turtles and amphibians use coastal marshes as habitat. A key component that maintains high biodiversity is the large interannual fluctuations in water levels that have varied by up to 2 meters between annual high and low water years over the past century. Since most wetland plants grow at an optimal water depth (for submerged or floating species) or soil wetness (for meadow/terrestrial species), as water levels go up or down, the plant communities must also shift with the shoreline accordingly. Repeated water-level cycles of 5 to 7 years prevent any one group of plants from dominating the landscape. A healthy aquatic plant community consists of a diverse mix of submersed aquatic vegetation (pondweed and waterweed), floating species (lilies and water shield) and emergent plants (bulrush and cattails) that create a three-dimensional structure allowing small fish to hide from predators, and large fish to ambush their prey. 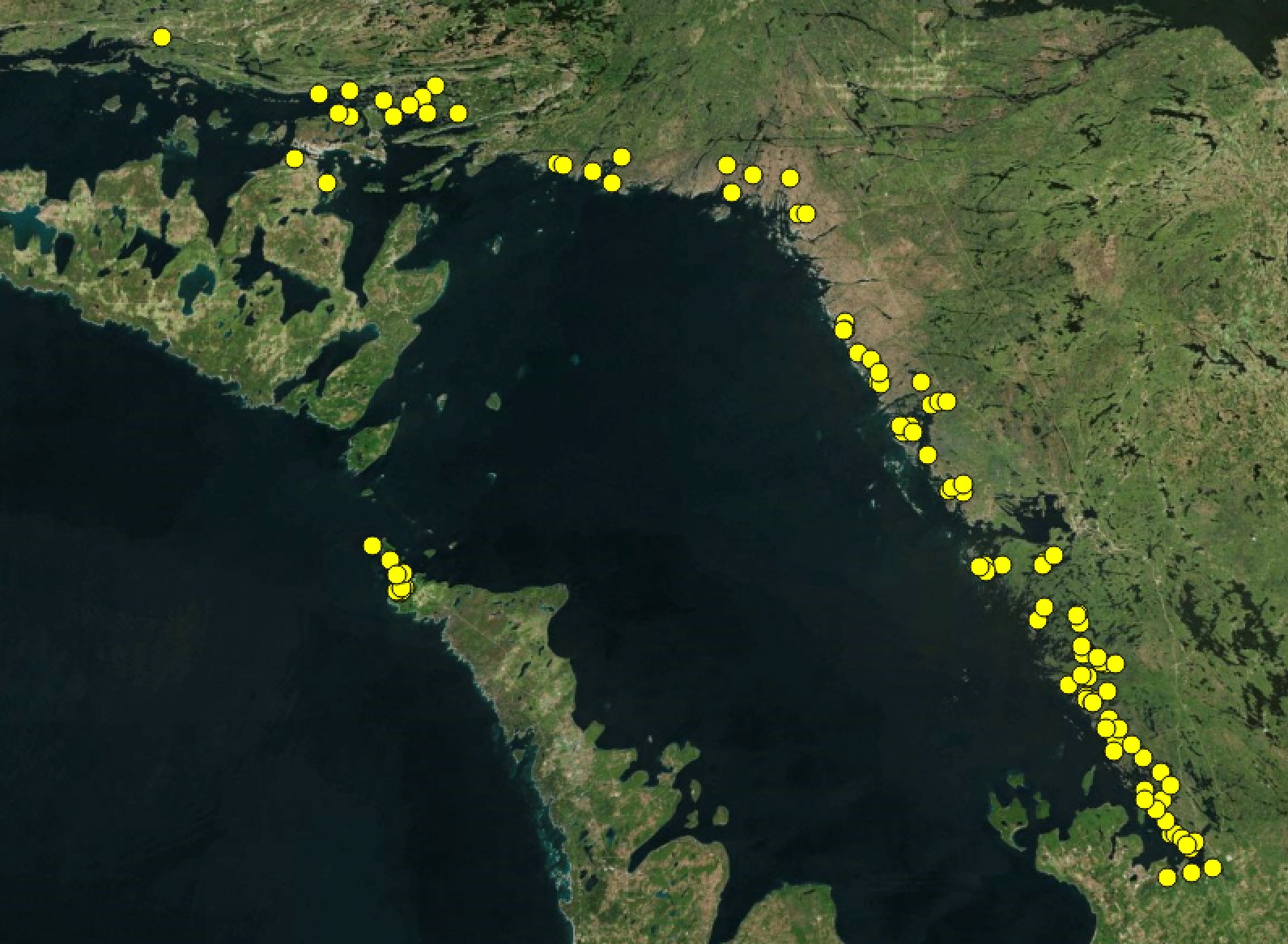 In 1999, water levels dropped below the long-term mean, and remained below historic norms for 14 years. During this time period, we sampled wetlands to determine their ecosystem health using a suite of ecological indices. During this low-water period (2003 to 2009), submergent and emergent plants migrated lakeward, while meadow species migrated towards the shoreline and colonized the previously submerged land. Within 10 years, the meadow and upland species like pine trees had become firmly established, and in some cases, where rock sills prevented water of Georgian Bay from flooding the wetland, aquatic habitats simply dried up. Just as suddenly, however, water levels rose above the long-term mean beginning in 2014 and have remained high over the past two years. We took advantage of this rebounding in water level and re-sampled many of the same wetlands in 2015 to 2017. Majority of the 50 wetlands we have visited are still in very good health, as indicated by the Water Quality Index (WQI) scores, that consider the relative amount of naturally occurring primary nutrients, water turbidity and planktonic algae in water samples, and the Wetland Macrophyte Index (WMI) scores, that consider the presence of pollution intolerant plant species. Although the mean Wetland Fish Index (WFI) scores were still indicating “Very Good” status for wetlands, they had significantly declined whereas the WQI scores had significantly increased. We attribute this discrepancy to the effect of increased water level on the catch efficiency of fykenets.

Despite the relatively good health of Georgian Bay wetlands, they have not been immune to the spread of non-native invasive species. When we sampled wetlands during the early 2000s, most of the wetlands were free of round gobies, whereas by 2015, they were present in nearly all sites although not necessarily in abundance. We had only seen gobies in abundance in our nets in southeastern Georgian Bay. Notable invasive plants include eurasian milfoil (Myriophyllum spicatum) and the common reed (Phragmites australis). Eurasion milfoil is an aquatic species that can form large, dense patches in the water column of wetlands, and limit the foraging ability of resident fish species. Phragmites is a relatively recent invader that have spread throughout the province into coastal wetlands, and along highway and roadway corridors. An aggressive competitor, Phragmites is an emergent plant with showy seed heads that can spread by seeds or via underground stems. Its tendency to form tall dense stands makes them particularly devastating for migratory semi-aquatic species such as the Blanding’s turtles. Our research in a Lake Erie wetland showed that Phragmites accounted for up to 170 ha (13%) of lost habitat to Blanding’s turtles. Given that many wetlands in Georgian Bay are small (less than 2 ha), it is frightening to imagine what the establishment of common reed could do within the Georgian Bay Biosphere Reserve. All these threats are compounded by the effects of a changing climate. Shifts in seasonality, timing and duration of seasons, precipitation, and water levels all have the potential to directly and indirectly affect the functioning and quality of wetland habitats. The shift away from historic, normal conditions may affect the resilience of Georgian Bay’s wetlands and open the door for future invaders or facilitate the spread of those already present.

Our ongoing research (2012 to present) on muskellunge highlights how the prized fishery has also been affected by human activities and climate change. While trophy-caliber adults continue to be captured in Georgian Bay, we have been unable to find any muskellunge young-of-the-year (YOY) at historically confirmed muskellunge nursery areas in the Severn Sound area. We surveyed wetlands in this area during 2012 and 2013, towards the end of the sustained low water period. We know that adult muskellunge return to spawn at the same sites each year and have found adult muskellunge near these sites during spawning season. Our surveys reveal that the wetland vegetation community had changed from historic conditions, with less diverse species composition and less complex structure. This a serious impediment for the survival of YOY muskellunge during their first year as they are very vulnerable to predators. They require suitable habitat structure to both hide from predators and to forage for prey. We also found an abundance of round gobies and yellow perch, both of which are documented egg predators. These changes appear to be linked to the presence of shoreline modification, and sustained low water levels that have been associated with global climate change. During the same period, we also sampled wetlands in northern Georgian Bay, where we found presence of YOY muskellunge. Even though both regions had experienced the same water-level scenarios over the past two decades, the hydrogeomorphic features of sites in northern Georgian Bay made them resilient to effects of sustained low lake levels that made the sites in southeastern Georgian Bay unsuitable for YOY muskellunge. The northern nursery sites were significantly steeper, deeper, and less sheltered under low water levels. We used these hydrogeomorphic features to develop a Vulnerability Index (Vin; see Figure 2) that can be used as a regional screening tool to identify vulnerable wetland habitats in eastern and northern Georgian Bay. 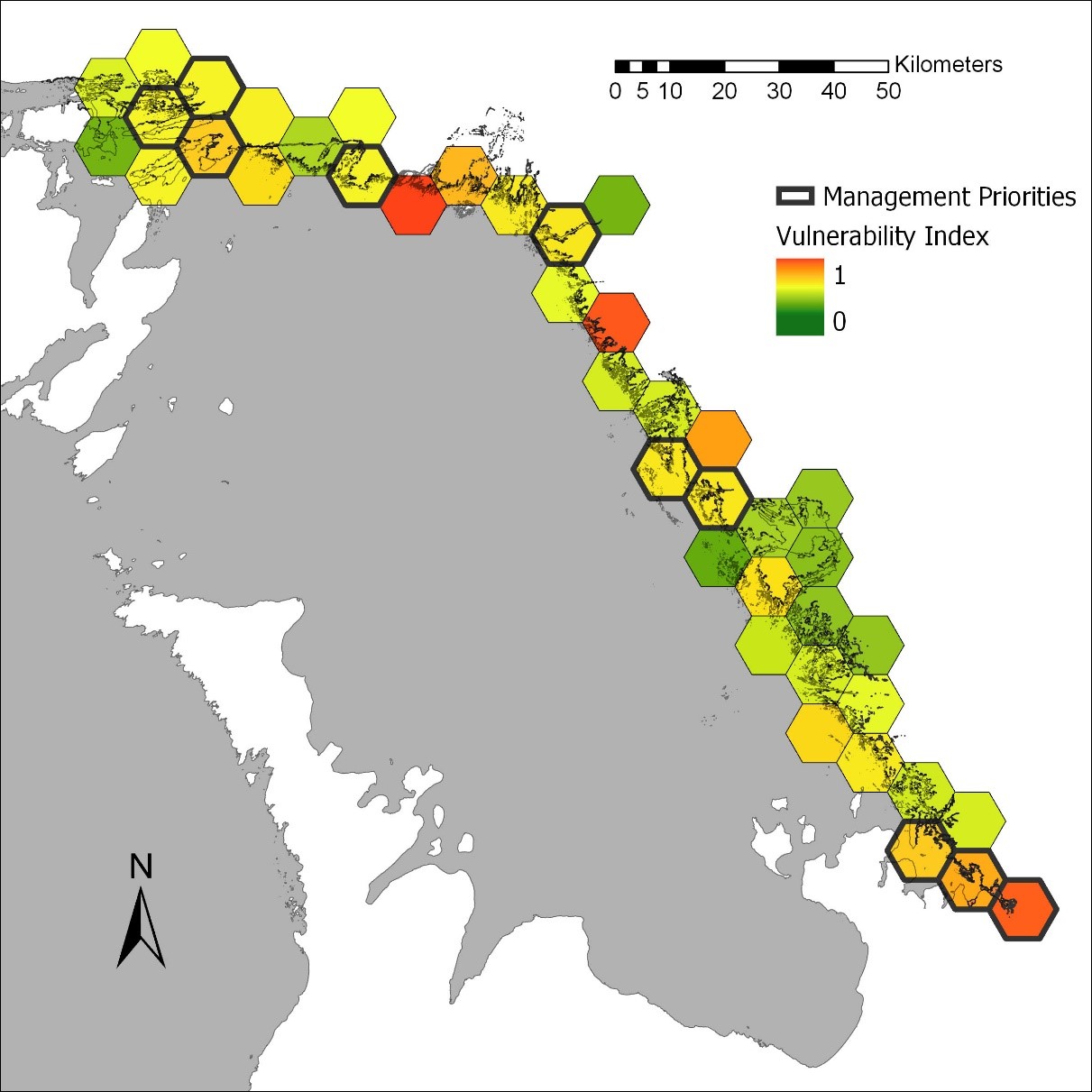 FIGURE 2 Vulnerability index (VIn) scores for the eastern and northern shoreline of Georgian Bay as per Weller and Chow-Fraser (2019). Scores range from 1 (red) indicating most vulnerable to 0 (green) indicating least vulnerable. Priority tiles for management consideration (top 10, bolded outline) were selected based on VIn score and total wetland area. Priority tiles support large wetland areas, many of which are considered vulnerable to community shifts under stable low water levels. 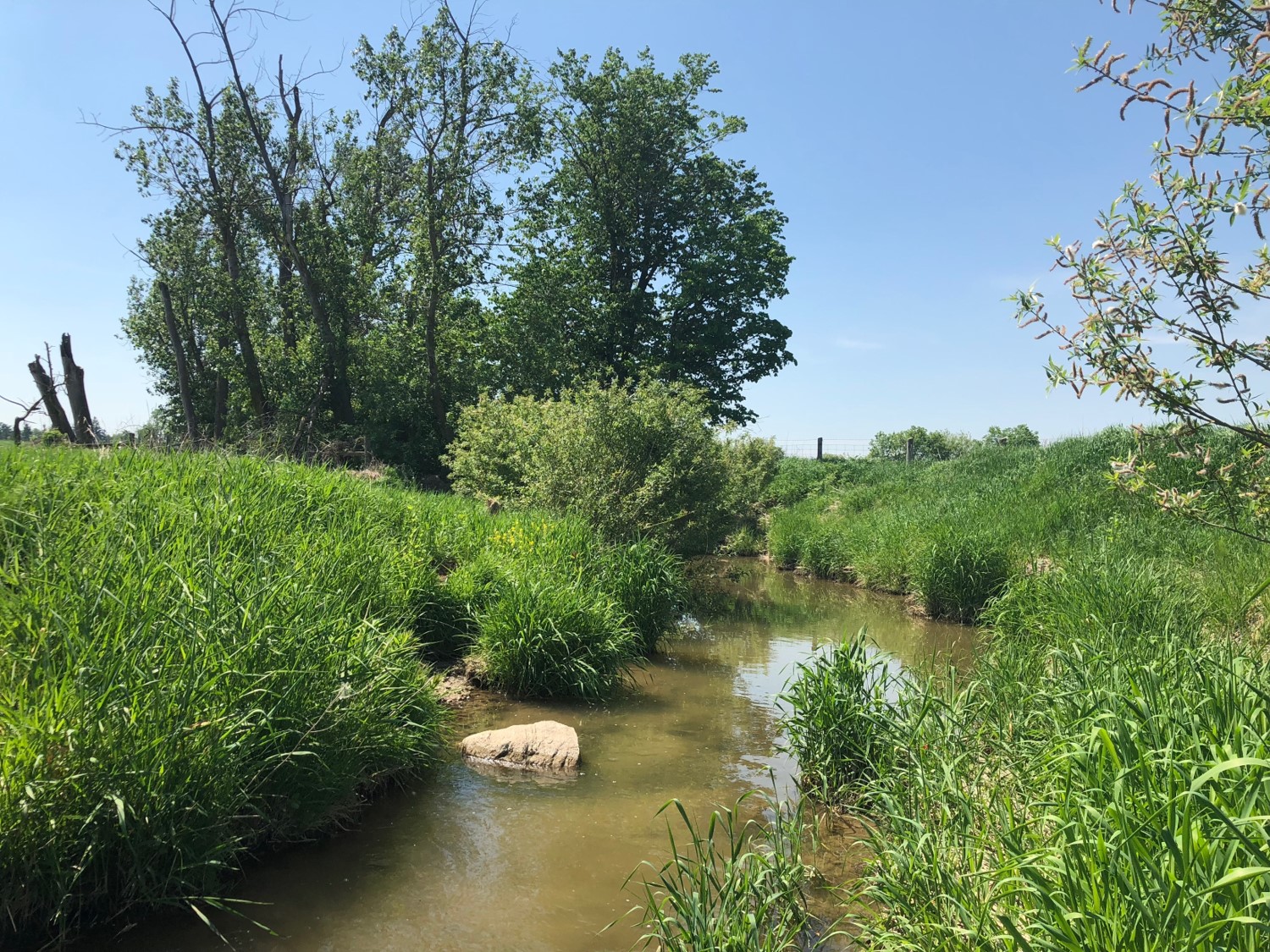 Identify an ideal stream for the program